Cycling from London to Paris - how hard can it be?

Like most people coming to the end of August, I wanted to get out of London and have some time exploring somewhere new and relaxing before the September term routine started all over again. I looked on Google Maps and logged in the distance between London and Paris. 160miles via Newhaven and Dieppe ferry crossing. I looked across my room at my bike and thought to myself, “How hard can it be”?

I’ve always used a bicycle as my main mode of transport when I was a junior living in Somerset. Since moving to London last July, I have gotten reacquainted with two wheels using it my commuter tool to get to and from work, covering maybe 50miles a week. I’ve always been fairly fit and rarely shy away from a physical challenge. I had a route planned, had some cycling bags for a small amount of luggage and I was ready to go. 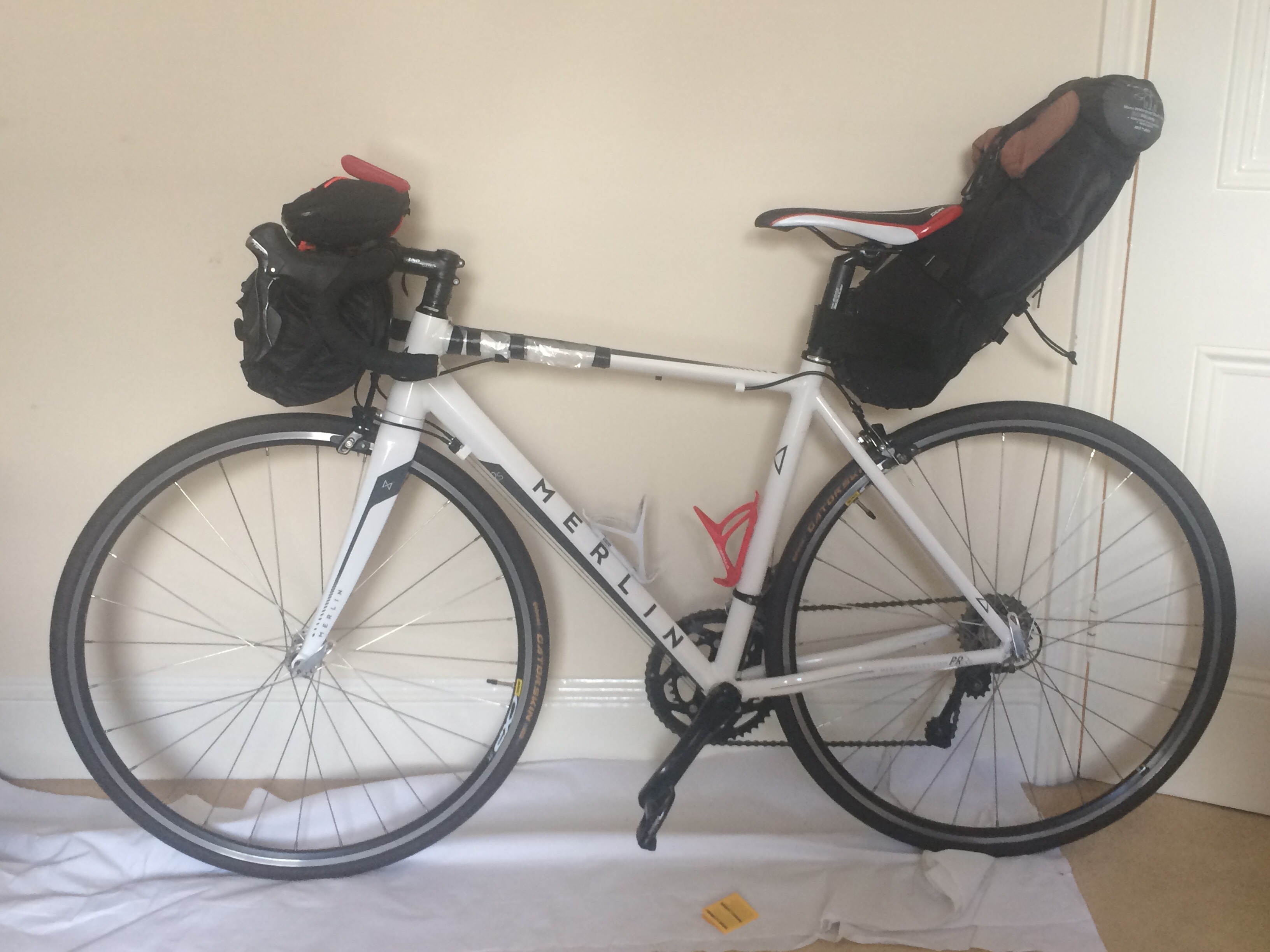 I left my home in Balham at around 3pm on the Sunday with the bike fully laden with my luggage for the few days I had booked in Paris as well as my travelling essentials. I was using a cycling computer to navigate a pre-loaded route – all I had to do was follow the line. My ferry wasn’t due to leave until the very precise time of 23:59 that evening, so I gave myself plenty of time to get to Newhaven in daylight and have some food before waiting to board the ferry. I left excited and motivated for the trip ahead…it took 10miles for me to realise that this was going to be a little trickier than I’d expected. I’d happily cycle to Windsor and back in a day but I had not experienced cycling with panniers or saddle bags before. The weight made the bike much trickier to control and the positioning of the bags made it difficult to change gear initially.  With a little adjustment outside of Sutton and swallowing a bit of ego and lowering my gears, I quickly found my rhythm and cleared London averaging a happy 15mph. I was met by some beautiful countryside leading in Surrey, which also meant some steep hills but the views were rewarding at the top! I arrived in Newhaven at around 7.30pm, meaning that I made very good time considering the issues at the start and wind at the end of the ride. This gave me time to refuel at a local restaurant and join the queue to board the ferry. There were a surprising number of riders: one pair was doing a tour around Normandy with bike trailers, there were a group of 10 guys doing London to Paris as well without baggage though not all affiliated…so I wasn’t as unique as I first thought! 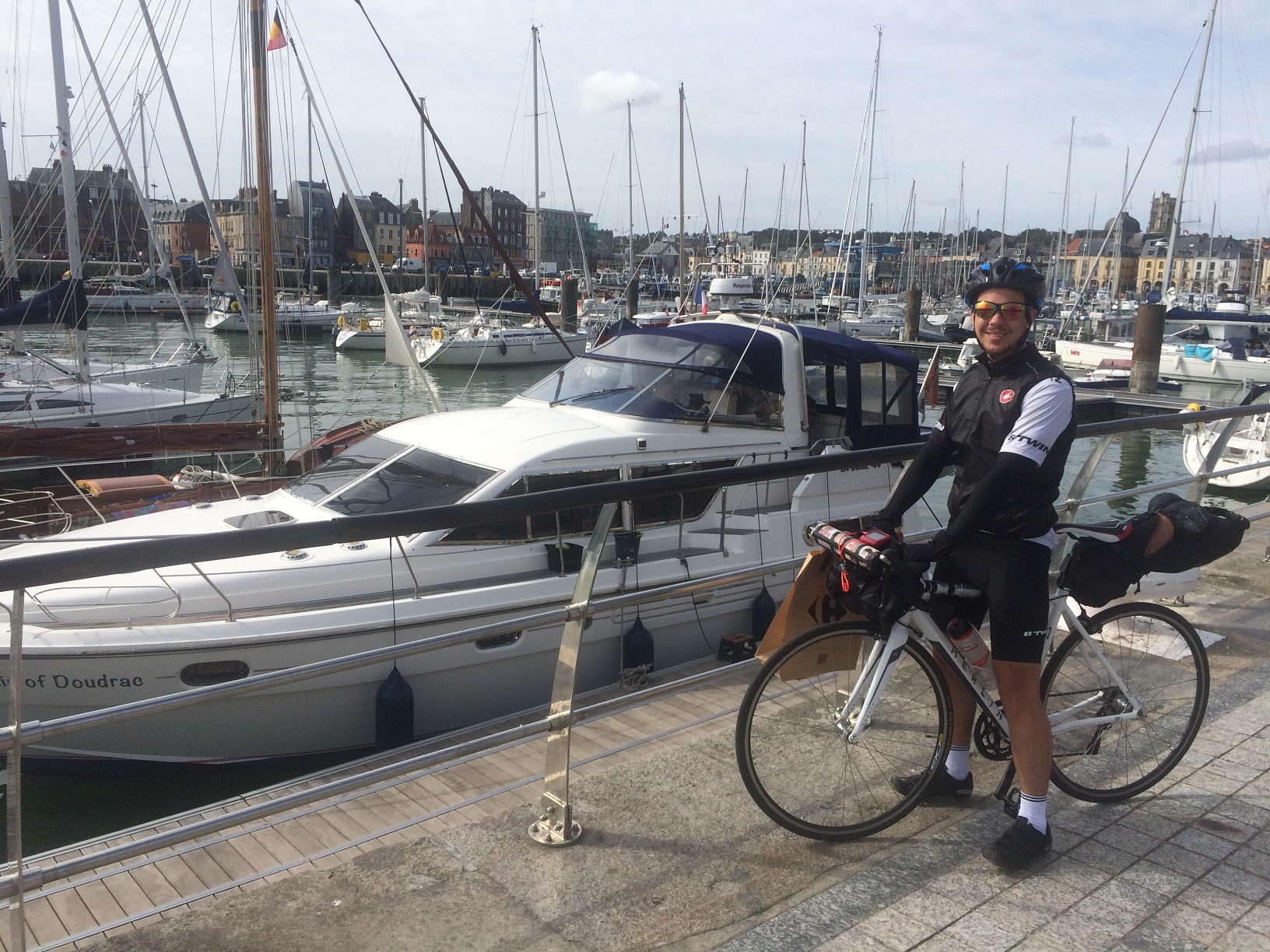 After four hours of broken sleep curled up in an arm chair, we eventually disembarked into Dieppe, which is a small yet pretty harbour town in Northern France. It was around 4:50am when I eventually cleared security; pitch black with only the street lights illuminating the route out of town. I set off ahead of the other cyclists wanting to make good time and also arrive at my first check point for breakfast at Forbes les Eaux, 30miles down the road. Leaving Dieppe it was relatively mild but then there was light rain for the next hour. This didn’t dampen things though as I was high on the novelty of waking up and cycling into France.

The roads were deserted, but I wouldn’t be using them for long. 3 miles out of Dieppe, starts a fantastic stretch of asphalt called the Avenue Verte. This is a closed off path for bicycles and pedestrians, through some fantastic countryside looking onto rolling hills and passing sleepy farmhouses. It’s a brilliant and safe link for all the local villages and towns in the area which mainly follows a similar route to the railway and main road. All was going to plan, I was averaging a good pace, it was now dry and the dawn was in full flow – then I hit the 12km mark outside of Forbes.

Where marathon runners have ‘The Wall’, cyclists have ‘bonking’ where your body hits a wall through tiredness, lack of energy and fuel and I believe has some strong psychological inputs too. Rule of thumb is to eat a little something every 40-60mins while in the saddle and try to get through around a litre an hour in fluid. I’d been pretty good at this, but the tiredness element and the initial high were having an effect. I was bonking badly, but luckily 4km outside of Forbes, two of the female riders who were on the same ferry came by and let me draft off them to the village. The input of company, conversation and something a little different gave me a second wind as we rolled into the village and found a local bakery to get breakfast.

4 pain au chocolats and two coffees later, I was a new man! I had had breakfast with the two girls who were actually two members of Clapham Chasers, a sports group just 1mile up the road from where I live. I asked if I could join them to Paris as the idea of company for the next 70miles was much more appealing! They happily agreed as we started the next long slog to the French capital.

We had to leave the Avenue Verte behind and join onto the French D roads. Initially I was apprehensive, I had cycled abroad before in Madeira up some stunning mountains and used to busy roads but I hadn’t cycled this far before and had the added pressure of the others hoping I could keep up -  but I was surprised. The roads were surprisingly wide, there was almost a hard shoulder to use most of the time to allow heavy traffic through but the drivers themselves were fantastically patient and seemingly had a much more open and accepting attitude towards cyclists in comparison to those on UK’s roads.  We settled into a comfortable pace, taking it in turns to lead the group and worked well as a unit. The route was mainly non eventful, long and rolling roads with the odd gradient to climb and decent and the occasional roundabout.

Entering the outskirts of Paris, cycle lanes starting popping up all over the place and with the preconceived view that Parisians are rather blinkered motorists (fully justified may I 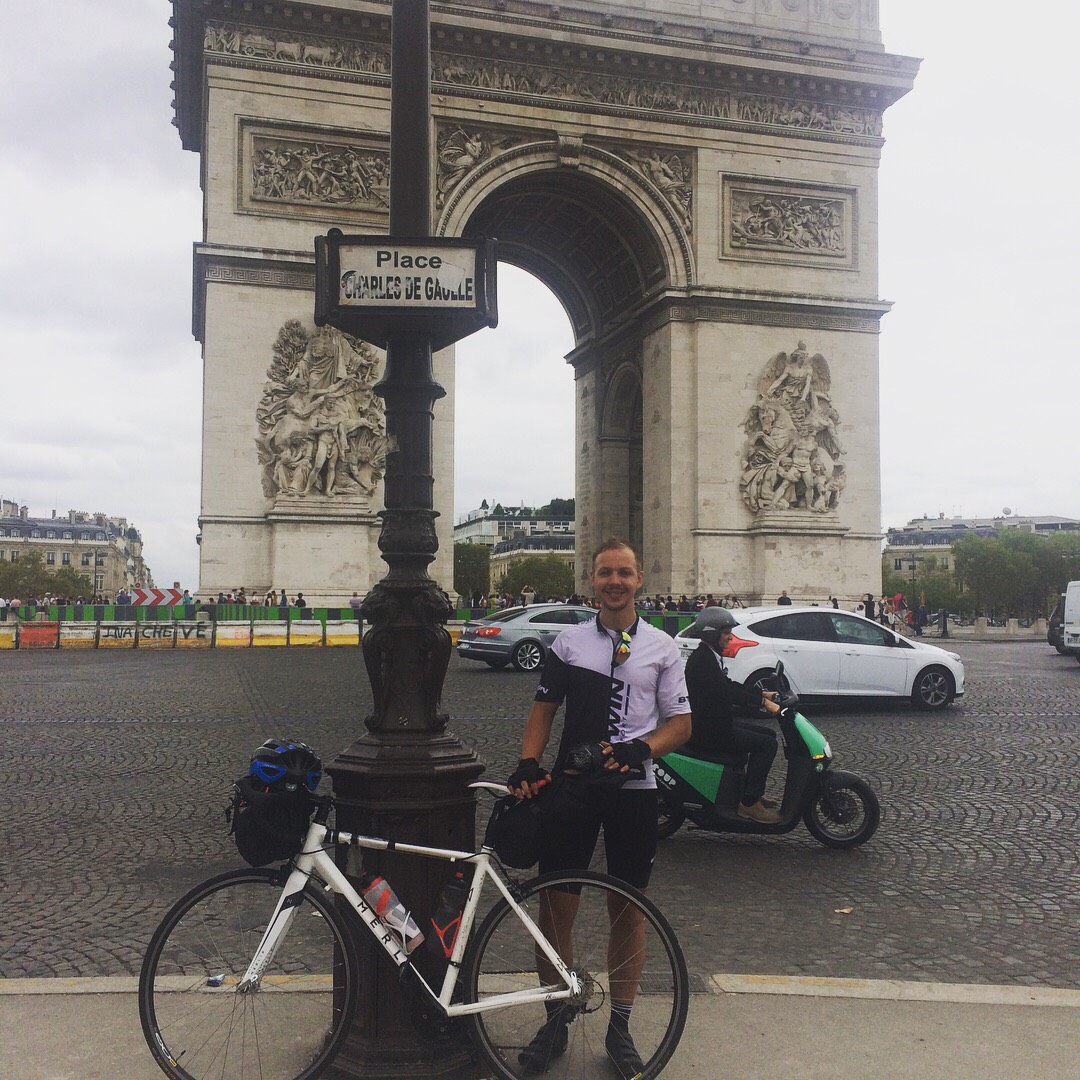 add) we took full advantage of them. We crossed the Seinne river and into Saint Denis which is just north of the main circular around central Paris. Here we came across a new struggle – the high buildings were playing havoc with our GPS signals. I’m normally rather content with following road signs to find my way but even doing this was very confusing. Our end destination was the Arc d’Triomphe and by sheer luck we were within a mile, a dead giveaway being cobbles. After 165miles on the bike and a sore bum, cobbles was an addition which wasn’t welcomed warmly but out last approach was an uplifting one under the great height of the landmark. Due to a technical hitch and me not starting my watch in Balham, the true finish time isn’t known but I’ve worked it out to be around 22hours which taking all into account I was very happy with. The obligatory photos were taken and en route to the hostel, I found my picturesque, small restaurant down a side street which offered a view of the Eiffel Tower and enjoyed my glass of wine I had visualised for the last 10miles.

It was an epic ride and adventure and one I’ll be doing again in the spring next year. The amazing bit was there were no real after effects apart from feeling a little tired and slow the next day. I enjoyed cafes and live events in the city, as well as my favourite pass time of butchering local languages and getting charitable laughs and acknowledgments. Everywhere I visit I try to at least learn “Hello”, “Thank you” and “Goodbye”. I spent two full days doing the tourist thing in Paris and then made a train journey to Rouen, a Fantastic medieval town with a great atmosphere and a mere 40miles from Dieppe.

The 40mile morning ride to Dieppe was straight forward and a success mainly due to not having any navigation to follow so I trusted gut instinct and the road signs. This offered a new challenge but like Forbes, I was in Dieppe in time for breakfast. I was a little gutted to be coming home, I was enjoying the cycling and exploring new places. I was welcomed back to the UK in the most British way possible – queuing patiently with horizontal rain trying to clear passport control. This was followed up by a very tired 60mile ride back into London, where from Croydon to home was heavy rain and strong winds, maybe I took the rolling French roads and mild climate for granted! 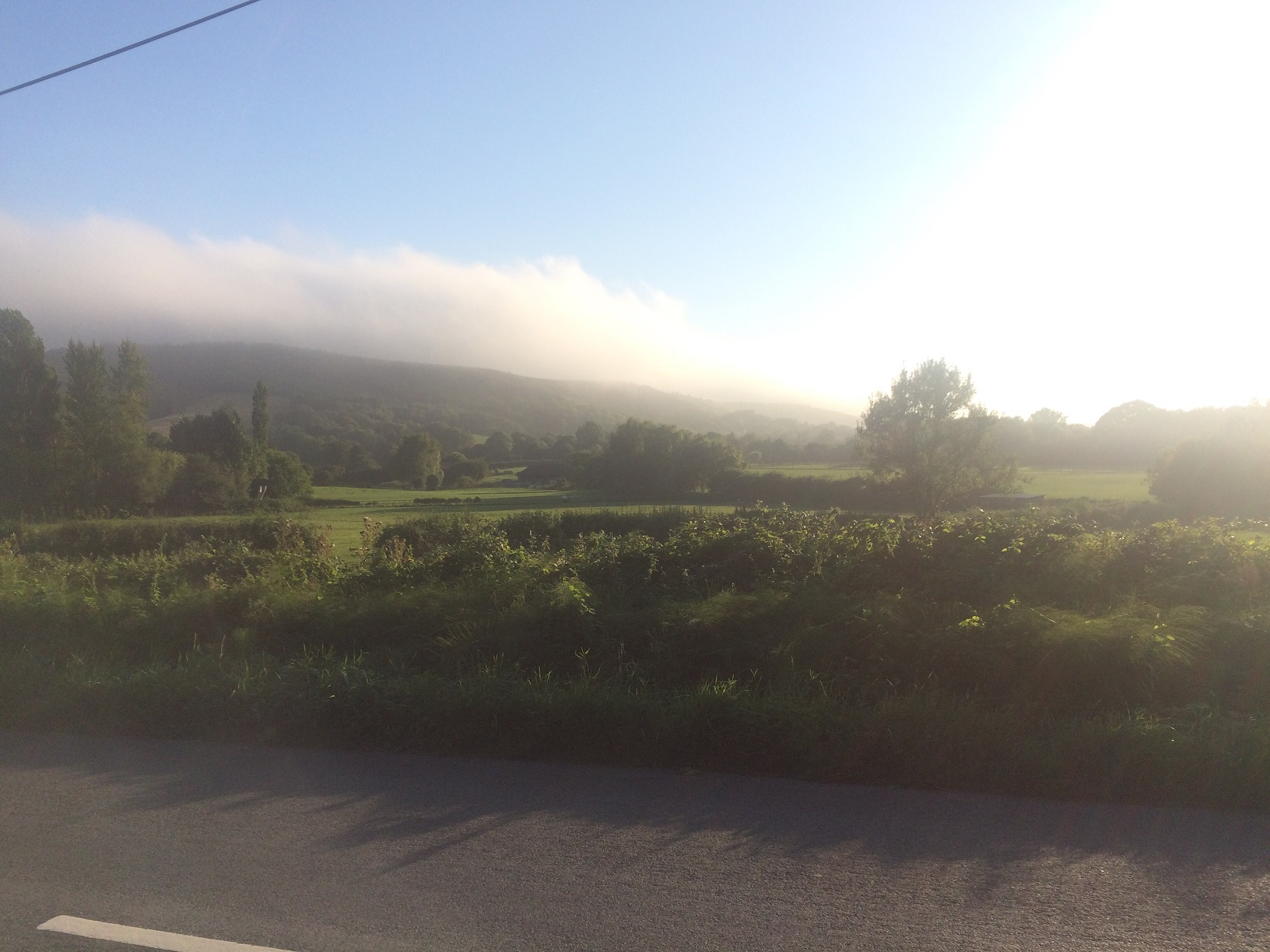 We offer a free, no obligation phone consultation to find out how we can help you - contact us today: